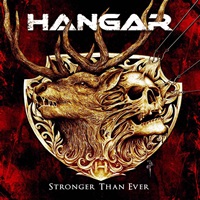 HANGAR – Stronger Than Ever

This Brazilian power/progressive metal act has been around since 1997- Hangar’s best known member being drummer Aquiles Priester, who has played with Primal Fear and Angra among others. "Stronger Than Ever" is the group’s seventh studio album, and given my first exposure to the group there’s a solid set of mechanics on display through these 10 tracks.

Songs such as "The Revenant" and "The Silence of Innocent" pulsate at that progressive meets powerhouse/double bass template – injecting a lot of instrumental heroic interplay that gets Dream Theater and Symphony X fans excitable. Keyboardist Fábio Laguna plays an integral role in the technical side or syncopation as guitarist Cristiano Wortmann, often acting as a contrast to the proceedings when needing a little groove element to the darker riffing, as "Forest of Forgotten" illustrates. Pedro Campos as a singer can be a little grittier during the upper reaches, but surely can hold out notes with the best in the business – comparisons will probably abound to Russell Allen for sure.

The off-time elements creep up on you, such as the entertaining drum/bass/keyboard interchange during the early passages of "Beauty in Despair", before the 7:40 song settles into a comfortable mid-tempo arrangement. The album ends with more of a power ballad "Just Like Heaven", in electric and acoustic formats – probably the most commercial offering for the record, and something that I personally feel should be possibly explored more down the line, as these musicians understand the proper restraint and dynamics necessary to pull off this type of track.

Hangar gives the listener close to an hour of entertaining songs and musicianship for "Stronger Than Ever", and I’m sure will meet favor with the aforementioned Symphony X / Dream Theater followers.