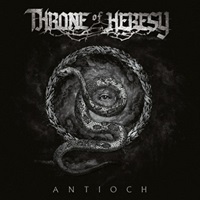 Forming in 2009, Swedish death metal group Throne of Heresy have been climbing out of the underground scene ever since. Their self-released debut album "The Stench of Deceit" in 2012, recorded at Abyss Studios (owned by Hypocrisy/Pain main man Peter Tägtgren), received critical appreciation while increasing the fan base. Abscession vocalist Thomas Cliford joined in 2013 for the EP follow up "Realms of Descration", setting the stage for the second full-length. "Antioch" contains 10 songs of very groovy death metal, where melody is definitely omnipresent but not in the twin guitar way a la Dark Tranquillity or In Flames – think Edge of Sanity or Amon Amarth instead and you’ll be in the right aural ballpark.

The guitar tone crushes – and when combined with the comfortable rhythm section displays, makes the instrumental "Exordium" and the hyper-speed oriented "Phosphorus" two distinct tracks to treasure. Thomas has a venomous way of spitting out his thoughts, fluctuating between his darker growls and maniacal screams that resonate well with people into Dan Swanö and Mikael Akerfeldt – forceful during the steady stop/start churner "Flagellum Daemonum" and equally low-tuned headcrushing "Souls for the Sepulchre". A lot of Amon Amarth comparisons will come up, especially in some of the doomy and cultural-oriented riff combinations during the 6:50 closer "When Bleak Spirits Pass", drummer Mathias Westman impressive in maintaining a rock solid groove tempo while injecting the right excitement for fills and double bass flourishes.

Clocking in at a comfortable 41 minutes, "Antioch" features a clear yet equally vicious production quality, one that doesn’t bury the bass and allows all moving parts the chance to shine. Not as easy as one would think in the death metal world, which can work to Throne of Heresy’s overall benefit. The band needs to inject a little bit more versatility into the hook department if they want longevity, but that’s a small criticism in an otherwise catchy, groovy death metal offering. Plenty of death purveyors enjoy melodic hooks that don’t necessarily revolve around twin axe mechanics- as such "Antioch" slots nicely when you need the viciousness of Swedish death metal with catchiness.