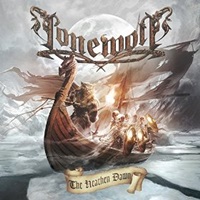 In the heavy metal arena, two school of thought exist. One that every recording should be a little bit different, as natural experience and maturation should challenge musicians to become creative in their output. The second school subscribes to tried and true principles: once establishing a foundation stylistically, don’t rock the boat and give the people what they desire. France’s Lonewolf certainly subscribe to the latter philosophy since their start in the early 1990’s – as their eighth studio album "The Heathen Dawn" resides in that speed/heavy metal Teutonic-oriented sweet spot that puts a lot of Grave Digger and Running Wild anthem principles to execute a guitar-harmony, culturally-hook oriented platform.

Guitarist/ vocalist Jens Börner and fellow axe member Michael Hellström (Elvenstorm) charge ahead with riff volleys and dual action that exhorts mead hall cheers and sing-a-longs – "Keeper of the Underworld" and "Into the Blizzard" two thunderous highlights. Drummer Bubu Brunner gives us an interesting hi-hat/ snare shuffle during the mid-tempo marcher "When the Angels Fall", showcasing Lonewolf’s ability to not always push the rhythmic accelerator, while the high guitar action during the chorus has more of a melodic death touch. Musically Lonewolf know how to go for the right aural sequences to promote fist flying, head banging action – how can you not be swept by the Maiden-ish "Until the End" or the culturally active closer "Song for the Fallen", as I suspect a lot of audiences humming the twin six-string elements when airing these songs out live.

Where Lonewolf may struggle to breakthrough on a larger scale is through the limited delivery of singing on the part of Jens. He has a clearer aspect to his voice than the obvious comparison to Grave Digger’s Chris Boltendahl, but he won’t be winning many points in the true/heavy metal legions like say Halford, Dio, or Dickinson.  Take a gander at opener "Wolfsblut" and his semi-hoarse mid-range voice is metal to the bone, so it’s a case of personality over stellar, soaring eagle notes in the long run – not a super deal breaker to these ears.

"The Heathen Dawn" gets the job done for the leather and stud clad old school brigade, and we know there is a healthy pocket of listeners who desire that Teutonic steel sound.