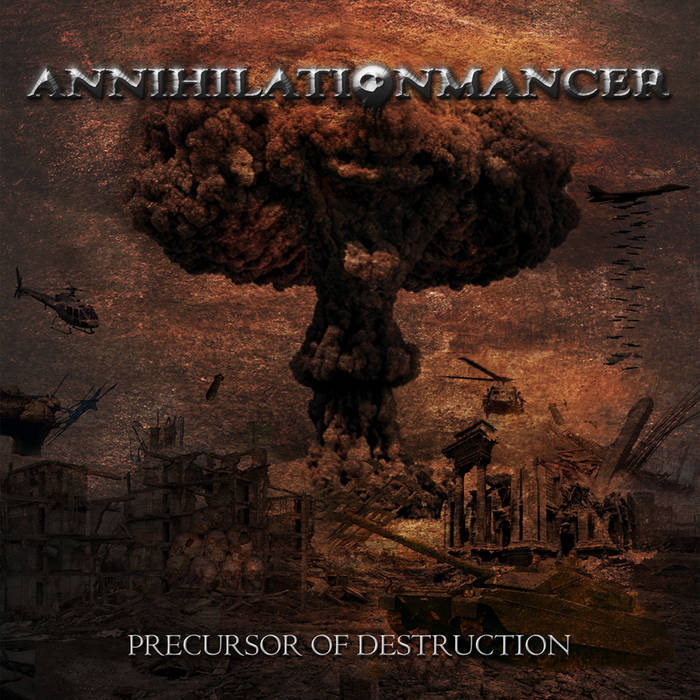 Annihilationmancer is basically an Italian one-man operation run by Bruno Masulli (In Aevum Agere, Power Beyond, etc.) in which he handles all the instruments and singlehandedly writes the material and so on. It was formed way back in 1994, but there was a hiatus of sorts between 1999 and 2009, I think. The music is a mixture of old-school thrash metal and old-school death metal, although it is more thrashy than deadly, if that makes sense. This particular EP consists of a handful of re-recorded demo tracks. Fittingly, the last song off "Precursor of Destruction" is actually a cover of Kreator’s "Tormentor", and that is a pretty good indication of where Annihilationmancer is at, musically and stylistically speaking. Songs such as "Unpunished Massacre Messiah" and "Sentence of War" bring to mind some of those bands that were simply mind-blowingly cool back in the 80s, namely Kreator, Destruction, Possessed, Slayer, Necrodeath, Dark Angel, and so on and so forth. The five songs that constitute this EP are decent although hardly any different to what countless of other death- and thrash metal bands have put out these past 30-35 years or so. Granted, there are some cool riffs and ideas here and there, but "Precursor to Destruction" never really takes off and delivers a solid fucking blow to the face, which is a shame. It is neither a complete waste of time nor a failure, because this guy Bruno is actually a pretty talented fellow when it comes to handling the instruments, but the quality of the songwriting is kind of lacking. I definitely prefer his other band named In Aevum Agere to Annihilationmancer.

HEADLESS – Melt the Ice Away