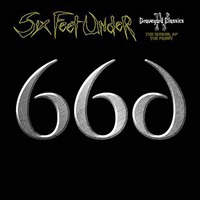 SIX FEET UNDER – Graveyard Classics IV: The Number of the Priest

Are audiences really clamoring for death growls with their traditional metal favorites? If so, this fourth edition of Six Feet Under’s "Graveyard Classics" series will whet your appetite. Metal Blade CEO Brian Slagel handpicked five Judas Priest songs and six Iron Maiden songs for vocalist Chris Barnes and the Florida death metal troop to put their stamp upon. Rather than choose all the of the ‘hits’ so to speak, we get deeper cuts like "Starbreaker", "Invader", "Flash of the Blade", and "Total Eclipse" among others.

Surprisingly the Di’Anno oriented material such as "Murders in the Rue Morgue" and "Prowler" isn’t half bad – but overall the premise of death growls over 70’s/80’s traditional metal renders half of the enjoyment of these classics obsolete. Musically a lot of the wah wah action and fluid guitar play remains constant, although the bass intricacies during the Maiden tracks aren’t really as up front as Steve Harris would display. There is only so many ways of differentiating growls and screams – and when Chris tries to sing ‘melodically’ during "The Evil That Man Do" or "Nightcrawler", it’s difficult to take things seriously as Dickinson and Halford run circles around his abilities.

Don’t know if this will really convert people to the Six Feet Under camp, but it appeases the band, so in the end that’s all that matters, right?