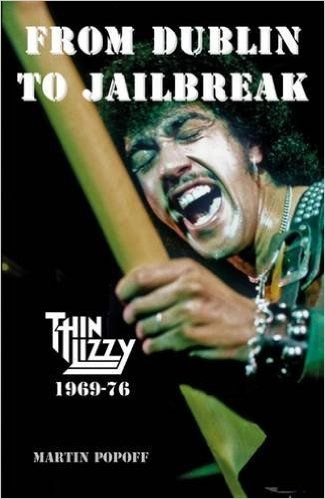 I usually cry out with joy whenever I see or hear that there is a new book by acclaimed author Martin Popoff on the way, a case in point being this excellent biography on the legendary Thin Lizzy. As the title suggests, the book focuses exclusively on the years between 1969 and 1976, which, to many at least, are considered the glory years of the band, namely due to the "Jailbreak" and "Johnny the Fox" albums, both of which were released in 1976. The thing with Popoff’s books and biographies is that each and every one of them is so damn well researched that it borders on the insane, and "From Dublin to Jailbreak" is no different. It is simply one of those books that is a joy to read and then re-read due to the amount of details contained within, not to mention all the names relating to all the different people that were somehow affiliated with the band, be they producers, engineers, managers, fans, critics, roadies, record company pencil pushers, and so on and so forth, that appear throughout. Then, of course, there were the tours and all the anecdotes relating to those, which Popoff has done a great job of accumulating and weaving into his interesting tale. No stone is left unturned, but, having said that, the focus rests mostly on the actual music itself as well as the tours and all the creative processes within the band. Their personal lives are not topics of discussion here as such, and I dare say that that actually works in its favor. There are other books out there that (try to) unravel the myth and mystery surrounding Phil Lynott. Personally, I love the record-by-record methodology employed by Popoff and the strict chronology that binds the whole thing together as opposed to jumping back and forth in time.

I mentioned the classics "Jailbreak" and "Johnny the Fox" before, but to me, the debut album by the band is pure magic as well, so I thoroughly enjoyed reading all the interviews with Eric Bell. A truly underrated guitarist who deserves a lot more recognition and praise for his excellent work throughout the years. The thing is that the early years are often overlooked, so it pleases me to no end that "Shades of a Blue Orphanage" and "Vagabonds of the Western World" are analyzed and discussed in detail. In addition, Brian Downey figures prominently in the book, which is simply awesome. He is such a great drummer and comes across as a genuinely nice guy who is very passionate when it comes to the music of Thin Lizzy, so it is very cool to hear him comment on the albums, the songs, the people the band worked with, and the (at times) grueling tours.

One of the things that I love and cherish the most about "From Dublin to Jailbreak" is that it actually managed to make me appreciate and re-evaluate certain albums and songs by Thin Lizzy that I had perhaps tended to either skip or simply not devote enough time to previously. The book raises so many interesting points that I simply had to go back and listen to some of the songs, which is quite unique, really. The devoted fan of Thin Lizzy obviously needs this book, but I strongly recommend the casual hard rock fan to invest in it too. "From Dublin to Jailbreak" appeals to both newcomers and hardcore Lizzy fanatics due to the fact that it tells a larger-than-life story about a group of unique individuals who went through failures and hard times as well as triumphs and musical victories in order to release a series of classic albums that some of us are listening to 40-45 years later, and that, my dear readers, is reason enough for you to get off your lazy ass and order this little gem of a book.