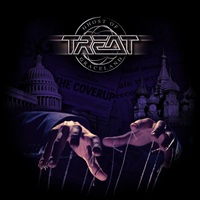 The seventh studio album from Swedish melodic metal veterans Treat, "Ghost of Graceland" is their second record since reuniting in the late 2000’s. Four of the five members come from their late 80’s lineup – while bassist Pontus Egberg joins the group in time for this new release. Shimmering, uplifting vocal melodies/harmonies abound, along with catchy guitar/keyboard hooks and an occasional sense of keeping up with the modern times through these 12 songs.

An "Immigrant Song" riff feel makes "Better the Devil You Know" an early highlight, keyboards from Patrick Appelgren giving off that early Deep Purple/ Led Zeppelin texture even as the tempo and multi-part harmonies sound slick and groovy, while the follow up "Do Your Own Stunts" has a semi-ballad / symphonic buildup, reaching back into their early influences and songwriting. A lot of times the quintet set themselves into a comfortable mid-tempo template, allowing certain mid-sections to employ extra guitar, keyboard or vocal compliments to heighten the melodies – "Alien Earthlings" the best example for this record. The expertise in construction and melding all the verse/chorus elements seamlessly puts Treat at the top of the pie chart – they aren’t rewriting the melodic metal book, they mere know how to make each chapter interesting, entertaining, and move the record along so that you want to go front to back.

Favorites vary depending upon my mood – currently love the uplifting "Too Late to Die Young" that features a killer lead break from guitarist Anders Wikström and the semi-epic opening title track, the shimmering vocal harmonies aligning well with the side shuffle tempo and darker guitar choices as the keyboards bob and weave around the arrangement. Much like Pretty Maids and UFO, Treat can write and record a relevant album beyond their 80’s heydays – so hopefully newcomers will join the old-timers for "Ghost of Graceland" contains high quality hooks and songs.

BAILOUT – …As the Winds Blow On