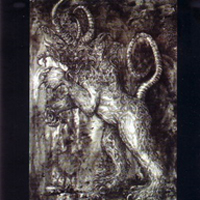 FROM THE DEPTHS – From the Depths

From the Depths were a thrashing 90’s black/death metal act from Cleveland, notable for having Nunslaughter’s Jim Konya (RIP) on vocal duties. The band only ever released two full-length records (the second with a different vocalist) before the members went their own ways (all of them having quite productive careers in music – even if most of them never got very high on the radar).

This album probably didn’t come to too many people’s attention back in the day, but thankfully Hell’s Headbangers are giving it a vinyl release to correct that. ‘From the Depths’ is an interesting record. The vocals are excellent – sometimes very deep and gravelly, but also rising in pitch to a black metal scream at times. There is some clear vocal work too that makes the record sound very original and fresh. The production is actually quite modern sounding and allows all of the instruments to shine through, yet preserves the arcane atmosphere at the same time. The songs work well. There is plenty to catch the listener’s attention and to hold them and keep them engaged. The genre mix is very much of its time but I enjoy the way this beast switches from thrashing beats to blasts and back. The keyboards add an extra dimension to the esoteric feel but also help the whole thing from feeling too dark (this isn’t as satanic as the cover might have us believe).

Overall then, this is a winner – a cool snapshot of a band who were largely overlooked at the time but who are definitely worthy of attention.