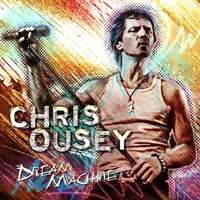 Perhaps most known in the melodic rock circles for his work in Heartland or Ozone, singer Chris Ousey also released a fine debut solo album in 2011 with "Rhyme and Reason". Changing things up a bit in the production and performer realm, Chris’ seasoned songwriting and professional, smooth vocals keep these 12 songs moving along seamlessly, bristling with the right chord construction and catchiness necessary for a lot of toe tapping, hand clapping, memory retention outings.

Players like keyboardist Adam Wakeman, guitarist/keyboardist Tommy Denander (who also helped Chris with the bulk of the songwriting), drummer Lars Chriss, lead guitarist Chris Green, and bassist Andy Loos provide the proper foundation for Chris’ vocal talent to shine. Be it more of a seductive 80’s "Fool’s Game" feel a la Michael Bolton on "Another Runaway", bluesy heaviness for the title track on up to a highway ready energy burner like "Better Time to Come", there’s little doubt that most ardent fans will be pleased with what they hear. Exemplary lead breaks from Green and Denander give songs like "Eager to Please" and the slinky "Into Your Dream" proper melodic hard rock depth, adding the right measure of shredding while still keeping the instrumental parts on point to the song at hand.

A logical extension of his first solo record, "Dream Machine" doesn’t re-write the melodic hard rock playbook but still offers the right amount of charisma and potent musicianship to capture the lion’s share of followers into the scene. In a just world, these songs would be rock radio staples and heard by arena-level audiences- but we all know this scene has become smaller and more underground. It doesn’t diminish the quality on display – Chris Ousey hit another home run through this platter. Brian Howe-era Bad Company fans, latter day Y&T, and a little bit of Baton Rouge comes to mind for certain.