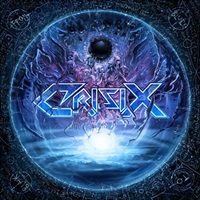 CRISIX – From Blue to Black

Thirty plus years the thrash movement has developed, exploding to become a worldwide phenomenon where local artists feel inspired to the speed riffs, venomous rapid fire vocals and high energy tempos with killer mid-range segment changes to impact bodies and brains. Barcelona, Spain’s Crisix originally began in 2008 as Crysys, changing names in 2011 while recording their debut album "The Menace" due to legal reasons. "From Blue to Black" is the quintet’s third record – a 9 song affair that has a lot in common with the NY crossover thrash scene just as much as it takes inspiration from a lot of Bay Area titans.

Vocalist Julián Baz can be fierce in his low growl moments a la Phil Anselmo during a more mid-tempo number like "G.M.M. (The Great Metal Mother**cker"), but take the tempo up 60-80 BPM for "Five as One" and you will hear a rapid fire, tongue twisting delivery that is decidedly more Nuclear Assault meets Death Angel. Musically the guitars slay, the drumming immediately gets the blood flow going as the opening trilling against the militant march strains gives way to a see-saw riff parade on "Conspiranoia" – hopefully a future set list opener because the audience will go nuts at the convincing construction here. The best thrash in my opinion has all working parts on the same page for a common goal: Crisix have all the talent, killer leads, smart pacing, and just lob hook after meaty hook at your ears that even newcomers will succumb to the quality.

Narrative elements kick off the engaging title track, semi-blast beats working against a riff filled with tapping tricks and this steady chugging action that maximizes head banging propensities – the gang vocals during the chorus providing great back and forth action. The album’s longest track "Fallen" at 7:29 contains an interesting mood dropping element half way through only to build back up in more of a echoing Metallica harmony-oriented electricity – guitarists Albert Requena and Marc Busqué laying down addictive twin harmonies against their normal crunchy rhythm riff duties.

Angelus Apatrida is probably the leaders from Spain in the thrash field these days, but Crisix is worth a look in terms of their energy and versatility. "From Blue to Black" is a solid thrash effort – probably aiding their quest to slay audiences from the stage.