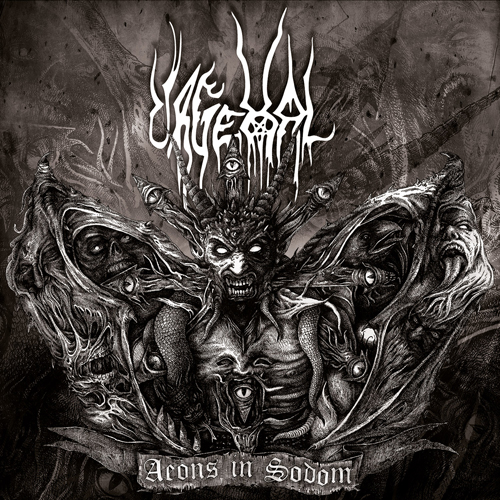 Those of you with at least a passing acquaintance with Urgehal most likely heard of the death of their iconic frontman Trondr Nefas back in May 2012. Given his importance to the band, it was fairly certain that his demise would also herald the end of the band. Which indeed it has- but it also resulted in one final release from the Urgehal stable.

Out of friendship, respect and as a tribute to their late singer and guitarist, the remaining bans members decided to go ahead with producing a final album. The first goal was to finish and make public the songs Trondr had already written but not released (which comprise half of the material on ‘Aeons in Sodom,’ many of which bear actual Trondr solos). The remaining portion was contributed by guitarist Enzifer. Faced with the unenviable task of completing the vocals, the band hit on the idea of inviting friends and band mates from other projects of Nefas to contribute.  And so ‘Aeons in Sodom’ features Nocturno Culto, Hoest, Niklas Kvarforth, Nattefrost, Nag from Tsjuder and Mannevond from Koldbrann among others. All of which is pretty special when you think about it – leading players from the scene coming together to deliver one last slab of dirty, misanthropic black metal from the bowels of hell.

In most ways ‘Aeons in Sodom’ stays true to the basic principles of Urgehal, serving up ten doses of uncompromising Norwegian BM. There is a small difference in the approach – it is much cleaner and more precise then Urgehal have ever sounded, as if they wanted everything to be perfect for their fallen comrade. The production is crisp and modern, not contributing much in the way of atmosphere but also not interfering with any of the power. The mix is extremely professional and balanced too. ‘Aeons in Sodom’ has a few old school moments here and there, demonstrating where they came from, but the sound has also evolved to contain a bit more groove and melody than ever before. All in all then, this is as dark and brutal as Urgehal ever were, while at the same time being more accessible than before too.

A fitting tribute and a fine way to set the torch to the longboat of one of Norwegian BMs underground greats.