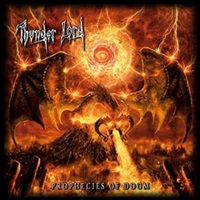 Active since 2002, Chilean quartet Thunder Lord come from an old school speed/heavy metal background, as "Prophecies of Doom" is all about the up-tempo pairing of riffs and rhythms, while the vocals often mirror the same urgency as the music. A lot of the lead work has that cultural/epic nature to the song at hand – very much hummable in songs like "Leave Their Corpses to the Wolves" and "Useless Violence".

I’d say a lot of the music has a Teutonic quality to it: early Helloween and Running Wild and a bit of Grave Digger come into the forefront when taking in a lot of the speedy guitars and bass/drum synchronization. The downfall for full engagement is two-fold: the production leaves a lot to be desired for a band this long into the scene (the leads are very weak sounding), and the main vocals are not that strong, sounding very forced and beyond the capabilities for what Thunder Lord should be getting across. So much so that by the time the title track rolls through 10 minutes into this 48-minute record, temptation to shut this off is a prevalent theme.

Being an old school metalhead who grew up on the 1980’s scene, there is validity to Thunder Lord’s approach: raw, energetic, unapologetic, and filled with those harmonic hooks and melodies musically that should garner the band a decent, respectable following. "Prophecies of Doom" could be so much more though if the band were willing to up their game in the vocal and production departments.