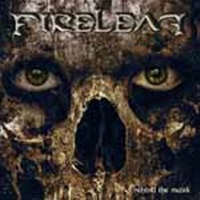 An interesting modern power metal quintet here from Germany, Fireleaf unleash their debut album "Behind the Mask" containing a singer in his mid-30’s while most of the musicians are in their 40’s (or in the case of ex-Stormwitch guitarist Ralf Stoney, 50). What you’ll get is 10 songs of Teutonic meets American power metal, lean riffing and robust melodies with a little grit amidst the high note holding propensities.

"Monsterman" for instance has that mid-tempo stutter-oriented guitar hook that makes for mandatory head banging, while singer Bastian Rose belts out a fierce pre-chorus/ chorus that goes ‘deep inside you’ as the lyrics roll off his tongue in a Matt Barlow-esque fashion. Lyrically a concept album surrounding a madman, we learn as the album goes forward the history behind his antics as well as what will take place in terms of story line – seems like a great union for Fireleaf’s brand of lean power metal. The more energetic arrangements such as "Death Throes" and "Isolation" actually take place near the middle to second half of the record, a smart move to give the band dynamics without necessarily front loading their material with all fast, blistering numbers that can put "Behind the Mask" in more of a prototypical position.

The doubled up rhythms and steady bass/drum support remind me a lot of the early years of Brainstorm, as you don’t have to worry about this becoming a keyboard-fest. Favorites included the back and forth bass/ twin guitar action on opener "Bloody Tears", the aforementioned "Isolation", and the epic 8:31 title track closer that just steamrolls through this juggernaut of a main mid-tempo chug while Bastian carries the emotional magnitude through his piercing mid-range.

One of the newcomers that power metal maniacs will be raving about, Fireleaf are off to a tremendous start.