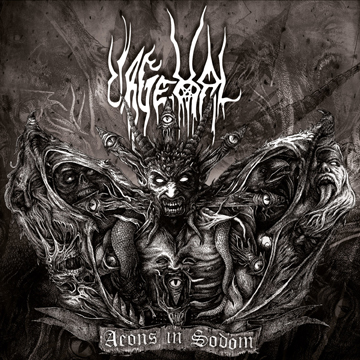 The underrated Norwegian black metal squadron that is Urgehal will soon unleash this wicked assault upon all you lousy scumbags out there, and I suggest you pay attention and pick up on this as soon as it becomes available, because it is, simply put, a highly atmospheric and cleverly written assault on all your puny senses. Although Urgehal was essentially laid to rest when Trondr Nefas (guitars, vocals) died in 2012, the remaining members decided to write and release a final album as a tribute and out of respect for Nefas. From what I could gather, Nefas wrote just about half the songs that constitute «Aeons in Sodom», so in many ways I find it only fitting and proper that Uruz (drums) and Enzifer (guitars) decided to complete this filthy 12-track slab of catchy and moody black metal. While Urgehal can hardly be labeled innovative or original, that hardly fucking matters, because not only have Urgehal been solid and consistent throughout their musical career, but this final album of theirs is awesome. The riffs are catchy and morbid, the vocals (courtesy of brilliant musicians such as Hoest, Mannevond, Nocturno Culto, Nattefrost, Bay Cortez, and so on) are totally convincing and infuse the songs with a dark and morose atmosphere that is both captivating and unsettling. Despite all the guest musicians appearing on «Aeons in Sodom», everything sounds coherent and cohesive. Quite remarkable really. The production is warm and organic, and the songs are raw and diverse. Before I forget, the last two songs are cover versions, more specifically «Funeral Rites» (Sepultura) and «Twisted Mass of Burnt Decay» (Autopsy). This is not only an awesome all-around record that one does not grow tired of listening to, but also a great tribute to a great musician. Do me a favor and check this one out!

HOUSEBREAKING – Against All Odds