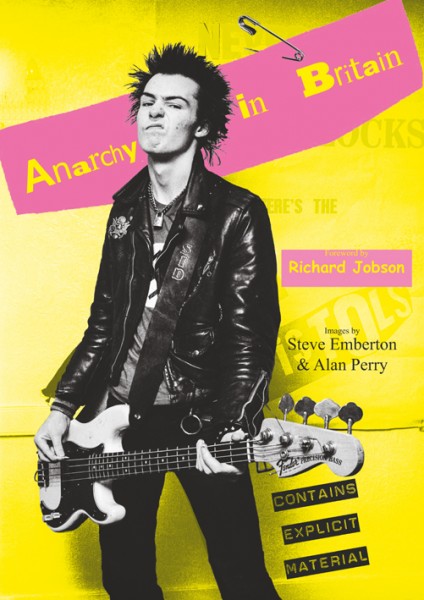 The excellent Wymer Publishing in the United Kingdom released this paperback late last year, and, as the title subtly indicates, it chronicles the rise and development of punk music in the UK back in the 1970s by means of photographs, concert flyers, promotional shots, quotes by punk musicians, extracts from interviews and TV documentaries, and so on and so forth. Photographers Steve Emerson and Alan Perry were there to witness it all and knew many of the bands and artists depicted in this nice-looking 128-page "photographic diary" of their. In that sense, there is not a whole lot of text to be read, but many of the photos are a story unto themselves and clearly do tell of key events relating to punk. Some of the photos are quite intimate and brilliantly shot while others merely chronicle important events and happenings in that scene back in the day without being fantastic from a purely technical perspective.

As is somewhat common knowledge, the 1970s were tough on the UK: violence, political unrest, unemployment, financial ruin, social tension, and the likes. Not surprisingly, all those things manifested themselves musically and as such a musical revolution came into being, namely punk music (or punk rock as some prefer to label it).  These disillusioned kids and youths simply spawned music that they could identify with, and I think "Anarchy in Britain" nicely illustrates what many of the punk bands in those days had in common as well as how they differed in terms of outlook and image. It was not as homogenous as some people are led to believe. Either way, it is interesting to see the many photographs of bands such as The Clash, The Damned, The Stranglers, Siouxsie and the Banshees, Sham ’69, Penetration, 999, The Jam, The Rezillos, and The Sex Pistols. As to the latter, there are some cool shots of Johnny Rotten and Sid Vicious included as well.

Although "Anarchy in Britain" is not exactly mind-blowing as such, it is a very cool book to have, and I thoroughly enjoyed reading it while listening to some of the classic punk albums from that era. If punk is your thing then check this one out as there are some great photographs (and a whole bunch of obscure ones as well) to be found within its pages.