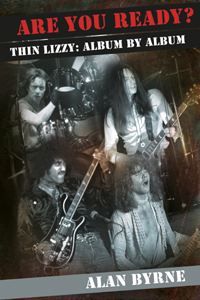 ALAN BYRNE – Are you Ready? Thin Lizzy: Album by Album

"Are You Ready? Thin Lizzy: Album by Album" by author Alan Byrne is the third and final book of a trilogy on Thin Lizzy. The trilogy also comprises "Thin Lizzy" and "Philip Lynott: Renegade of Thin Lizzy". Unfortunately, I have not read the two books on Lizzy that preceeded this new one, which I kind of regret now, because this third installment by Byrne is an excellent read. I certainly found it captivating from start to finish and easy to digest. As the title suggests, the book focuses on the discography of Thin Lizzy, which is to say the 12 studio albums and 2 live albums that constitute the most important body of work by the band. In that sense, "Are You Ready?" is not some sensationalist biography that sets out to chronicle all the sex, drugs, and rock ‘n’ roll related stories and myths associated with the Irish legends. Byrne has a different approach; he analyzes how each and every album – from the 1971 self-titled debut to the 1983 live effort entitled "Life: Live" – were put together. While that may seem like a simple premise or a somewhat one-dimensional story on paper, the fact of the matter is that Byrne has written a highly entertaining and thought-provoking book on how Thin Lizzy worked as a group in rehearsals and in the studio throughout the 70s and 80s. As with pretty much any great band, things rarely went smooth when it came to composing, arranging, recording, and mixing an album, and Byrne does a great job at examining how and why all that friction arose whenever Lizzy occupied a studio and were to record an album.

I am very impressed with the amount of research conducted by the author, and I especially enjoyed reading what producers and engineers such as Chris Tsangarides, Kit Woolven, and Will Reid Dick have to say about Thin Lizzy and what their work with the group entailed. Band members such as Scott Gorham, Brian Robertson, Brian Downey, and, quite surprisingly, Snowy White have also been interviewed. Other people who were somehow affiliated with the band, be they photographers, album artwork designers, or managers, also lend their voices to the fascinating story that is Thin Lizzy. There are a lot of funny and cool anecdotes throughout the book that left me smiling and laughing to myself, and I am pretty fucking sure that you will find those funny, too.

As I mentioned before, the book is not some sensationalist piece of semi-fiction as so many other so-called biographies are, but Byrne does examine and study the infighting that occured within the group as well as the drug and alcohol abuse that ultimately destroyed the whole thing and left it in ruins. Needless to say, the tragic events surrounding Phil Lynott’s death are also touched on, but the primary focus is on all the stories behind the albums as well as the studio sheenanigans, and Byrne retains that focus throughout. One thing that the author deserves a lot of credit for is his constructive criticism and evaluation of all the songs that made it onto the Thin Lizzy albums, because honestly speaking not all of them were very good. Some were downright terrible. The interesting thing is that Byrne closely studies different demo recordings, outtakes, works in progress, and then compares those to the final studio versions. The archive of Lizzy recordings is vast, but Byrne guides us through some of that stuff with elegant and ease in this book. Very cool!

"Are You Ready? Thin Lizzy: Album by Album" is a highly recommended piece of literature that all fans of Thin Lizzy and/or Phil Lynott ought to check out immediately. Some previously unseen photos have been included and the book is roughly 235 pages long. Check out the Soundcheck Books website for more information: http://www.soundcheckbooks.co.uk/are-you-ready/

TIEBREAKER – We Come From the Mountains