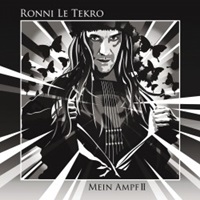 As promised, "Mein Ampf II" is the sequel to last year’s release, and the second of a trilogy of solo albums planned from infamous TNT guitarist Ronni Le Tekrø. Those who are expecting melodic hard rock from his songs will steer clear, as this delves more into his childhood influences and explores psychedelic rock, blues, and offshoots from the 60’s and 70’s. The opener "Muddy Waters" is a breezy, easy listening number that opens Ronni up to a lot of David Gilmour-like measured play, his vocal style light as a summer breeze. The follow up "Lo Campana" has an electronic drum undercurrent and pulsating keyboards to give the arrangement more of a gothic/alternative feel.

There are some faster, uplifting tracks that reach heavier heights – check out "Jesus Chrysler Supercar" for Ronni delivering a killer dance-oriented riff over vocals that recall David Bowie in his 70’s prime. Experimentation and an open mind are key to let these ideas ruminate deep in the recesses of the brain and body – Ronni challenging the outer parameters of his abilities in non-hard rock fields and for the most part succeeding. The final track "Eyefilters" at 7:22 is a personal favorite, the slow drum beat and darker keyboard tones giving off a bit of a Depeche Mode effect, the simple chorus equally as hypnotic as the ‘na-na’ oriented background vocals.

I’d say "Mein Ampf II" explores more of his softer sides of psychedelic and alternative music tastes than the previous platter. As long as you know accordingly, this is a labor of love that makes me believe the man has more than enough ability to write and perform in a broad spectrum of fields.