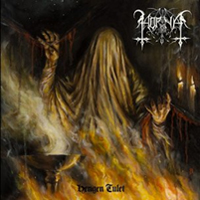 ‘Hengen Tulet’ is the 9th full length album from Horna. Now, I don’t speak a lot of Finnish, but as far as I know the title translates into English as ‘Blocked Toilet’. You are free to take that one up with Google translate if you wish.

Although I have been at times a great fan of Shatraug’s output in its various forms, I have generally struggled with Horna and this disc is no exception. The first few listens are a little underwhelming. The main reason for this is the deliberately muddied production. Anyone familiar with Sargeist, Behexen or Horna knows that the Fiins often try to dirty their sound after recording, and that this can damage the final mix and accessibility of the recordings. Thankfully the mix isn’t as bad here as it was on the last Sargeist album, but the overall sound generates very little in the way of BM atmosphere and makes it more difficult to hear what is going on – so obviously not a good choice. Ok, the guys might not want to do something as clean as ‘Let the Devil In,’ but their production aesthetic damages the potential appeal of the presented work. A second reason the album is underwhelming at first is that although the songs seem quite straightforward, there are actually quite a lot of melodies and hooks that lurk beneath the surface and that take a while to make their presence felt.

If you decide to persevere, you will find that these hooks do slide under the skin and ‘Hengen Tulet’ will start to work its dark magic. As we know, it is a good thing when an album doesn’t offer up all of its joys on the first few spins. In fact, ‘Hengen Tulet’ is still offering up new reasons to like it after twenty spins. The mix of old school BM with uncompromising fast sections, underscored by Shatraug’s undisputed ability to put a decent song together, means that this is a worthy addition to the Horna canon. Worth trying out.