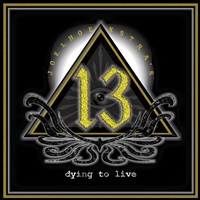 Current Whitesnake guitarist Joel Hoekstra has a solid supporting cast for this "Dying to Live" album. Two powerhouse vocalists in Russell Allen (Symphony X) and Jeff Scott Soto (Yngwie Malmsteen, Journey) plus bassist Tony Franklin and drummer Vinny Appice give this Joel Hoekstra’s 13 project 11 killer songs in the vein of early 80’s melodic hard rock/ metal. Joel delivering all of his old Randy Rhoads/ Vivian Campbell oriented chops for the breaks within "Anymore" and the ballad "Dying to Live", while some of the songs reach more melodic rock/ Foreigner terrain, such as "Changes" (think mid 80’s).

Opener "Say Goodbye to the Sun" and follow up "Anymore" possess a lot of high energy hooks and bluesy melodies that come straight from the Rainbow/ Dio mold, just featuring the benefits of modern, lively production values. Joel knows how to develop a proper uplifting riff and build upon its energy, even if it’s in a more commercial slant like "Never Say Never" that one could easily hear at peak volume on rock radio from coast to coast. Russell Allen and Jeff Scott Soto use their magical ranges to carry this material into the rarified top tier plateaus due to their seasoning and phrasing abilities. The closer "What We Believe" has a lot of that exotic nuance that made early Led Zeppelin so special, a 6 minute semi-acoustic/electric ballad where Jeff Scott Soto trades off verses with Trans-Siberian Orchestra bandmate Chloe Lowery for that feminine contrast.

For years we wondered what would happen with the melodic hard rock/metal genre – and it seems like today, there’s higher quality songwriting and product rolling out month to month that rivals the best of the 1980’s output. "Dying to Live" is a strong contender for the best of 2015 in this particular genre.