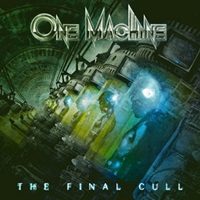 ONE MACHINE – The Final Cull

Guitarist Steve Smyth (ex-Testament, Nevermore) and compatriot guitarist Jamie Hunt (ex-Biomechanical) revitalize One Machine with three new members for their sophomore release "The Final Cull"- the most significant in the lineup restructuring is vocalist Chris Hawkins, replacing ex-Mercenary singer Mikkel Sandager. This nine song effort is a cross-section of power groove and progressive-oriented thrash metal that features strong, melodic vocals and of course seasoned technical chops in the guitar department.

The seven minute title track for instance features a lot of carnival-oriented nuances in terms of keyboard use and quieter waves against the heavy, low end power proceedings… not dissimilar to the work of Nevermore or later day Forbidden. Chris’ high screams have a lot of ease in falsetto to Alan Tecchio – bold and sustaining during a lot of the chorus or closing verse moments that 90% of his contemporaries wish they could attain. Conversely when needed to channel an eviler or quieter side, the follow up "Summoning of the Soul" builds on both the vocal and musical levels, the harmonic aspects giving way to some clean introspection that launches my headspace back a good couple of decades.

The band keep most of their material tight and quick firing at a three-four minute clip, but two of the tracks showcase more of their intricacy and progressive aspects, including the Middle Eastern instrumentation that floats through another seven minute highlight "The Grand Design" which is more of a doomy ballad. One Machine are equally adept at keeping the double bass flowing and riffs chugging on "New Motive Power" or "Welcome to the World", so do not fear about boredom as the band can create a record that ebbs and flows with mood diversity.

Those who want a more aggressive Nevermore or Forbidden with Pantera-oriented aggression will love One Machine. "The Final Cull" provides a solid foundation for this new lineup to build upon.

AMORPHIS – Under the Red Cloud