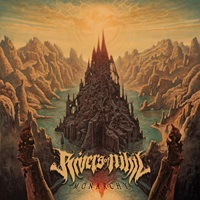 The first album from this Pennsylvania quintet "The Conscious Seed of Light" didn’t sit very well in the hook department, which can be a problem for technical death metal bands. "Monarchy" is the follow up, and with a couple of lineup changes (welcome Alan Balamut on drums and Jon Topore on guitar) plus a boatload of touring under their belts, you can sense a honed in attack that has more melody and hooks against the exemplary musicianship and drop on a dime riff/time changes.

At times watching the bottom drop out a la Gojira during "Perpetual Growth Machine", the blasting precision against churning, swirling guitars gives the follow up "Reign of Dreams" added girth. Bassist Adam Biggs gains certain stage in terms of his impressive bottom end chops, as the speedier "Dehydrate" illustrates, while the ethereal instrumental sections build to this intense crescendo. Consciously holding court in a mid-tempo position also allows certain riffs and chord progressions to just level the aural landscape, ensuring the title track maximum body carnage in pits all across the globe. Expansion of those musical thoughts takes place on the close to 6 minute instrumental "Terrestria II: Thrive", where everything from post-rock to progressive, dj-ent to thrash and death intertwine, a dream come true for fans of Cynic, Atheist, and Death.

The first half of the album has shorter arrangements while the second half has Rivers of Nihil exploring more of their outer reaches in terms of dynamic nuances (brooding intros, clean to heavy transitions) that are still technically sharp. Overall, "Monarchy" contains enough versatility and power to launch the band into the big leagues – a huge step forward in my opinion which is surprising for a younger group. Let’s hope more fans come into the fold, as they could be future headliners rather quickly.