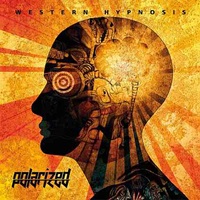 A newly formed international project, Polarized consists of four musicians who hail from the lands of Connecticut, Bosnia, Italy, and Sweden – starting in 2013, "Western Hypnosis" is their debut full-length record. Probably the most notably name in the bunch is bassist Lars Lindén, who also plays in Carnal Forge – the rest of the lineup consists of vocalist/ guitarist Daniel Botti, guitarist Dino Medanhodzic, and drummer Marco Di Salvia. Stylistically this is a modern brand of thrash – the melodies coming through in a power harmony way in terms of the guitars, as the vocals have a vicious grit that will keep the band from becoming future commercial rock radio staples.

Daniel’s vocals for one come from a spitfire Chuck Schuldiner of Death territory – clearer but forceful in terms of his rapid phrasing on killer tracks like "Recipe for Death" and "Permanent War". A lot of the riffing and catchy lead breaks throughout straddle the lines of latter day Testament, most facets of Arch Enemy, and possibly a touch of In Flames – there’s remarkable consistency in terms of the construction and flow from song to song. Polarized feel just as comfortable riding a slower, almost doom-like tempo for the front portion of "Listen" before the six minute track transforms into a solid cruising metal anthem as they do being more exotic or tribal for the Grip Inc.-like opener "The Seventh Sin".

Considering this is an international assembly, you wouldn’t know the difference that all the musicians had recorded in their own studios and then brought things together with Dino at Radionika Studios for mixing and mastering. Polarized hopefully will become more of an active entity based on this debut album – there’s a great combination of American aggression and European-styled musical sophistication to keep "Western Hypnosis" top of mind for all types of power/thrash fans.