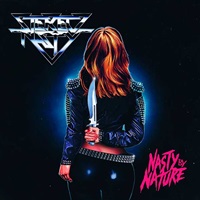 Rare is the day that a debut release from a more traditional heavy metal/ 80’s oriented act comes down the pike from Ireland, but that’s the case currently in front of my ears with Stereo Nasty. The quartet have all the primary tools down – riffing and chord progressions that are lean and mean for maximum head and body crushing movements, air guitar-oriented soloing maneuvers, a rhythm section that locks and loads through solid metal tempos and a vocalist that has the grit and balls to carry the tunes home.

It’s a safe bet that Judas Priest, Accept, Saxon, and Malice would be four bands that these musicians know a lot about. After the sirens wail during the introduction moments, the main guitar tone and rhythmic Adrian Foley guitar gallop for "Holy Terror" sure doesn’t sound dissimilar from a lot of mid-tempo action circa "Restless and Wild" Accept – and "The Fear" could be a distant cousin to "Grinder" from the "British Steel" record of Judas Priest. As a singer, Mick Mahon will probably not be mistaken for the spot on Dickinson/ Dio masterfulness, but his personality and passion for the art more than makes up for this possible deficiency during pumping anthems like "Out of the Fire" and "In the Blood".

The cover art with a leather clad woman wielding a knife behind her back brings even more focus on their 80’s influences and orientation – Stereo Nasty are content to stand solidly behind their favorite era in metal. Who needs 5 chords when three will do? Studs, leather, denim vests, flying V’s – "Nasty by Nature" succeeds because the band set the parameters of their style early on, hone in and do not let go for the 10 song, 41 minute recording. Old schoolers unite!