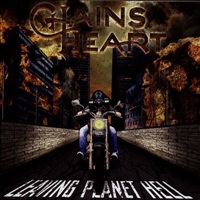 Greek quintet Chainsheart formed in 2011, releasing their debut album "Just Another Day" independently the following year. The follow up "Leaving Planet Hell" has the Pitch Black Records seal of approval, and so this is my first foray into the band’s style. Those familiar with acts that straddle the melodic hard rock and metal lines will find plenty of classic references in terms of chord progressions, riff choices, and particular hooks throughout these 11 songs.

Lead guitarist Kikis A. Apostolou and rhythm guitarist Alex Chamberlain embody a traditional 70’s/80’s foundation – bluesy and heavy when called for, but always in line with the needs of the song. Be it anthem oriented on "Flames That Rise" or using intricate acoustic touches that add ambiance on the follow up "Mystery". You will think of everyone from The Scorpions and Ritchie Blackmore to Michael Schenker within their tasteful work. I get a "Blackout" feel when taking in the steady tempo and catchy mini-gallop to the main parts for "Return to the Stage", while the commercial side of the band comes out on "Never Stand Still", the more open verses contrasting against the more AOR-oriented chorus, while twin guitar harmonies weave in and out of the arrangement.

The major drawback to full appreciation for Chainsheart lies in the vocal performance of Yiannis Savva. He struggles to convincingly delivery in the upper register – you can hear the strain significantly during "Dangerous Drop" or "Breeze", where he tries to hit Michael Kiske or like-minded helium highs, but is best served keeping things in a more palatable Don Dokken-oriented mid-range mode. Given the classic style Chainsheart perform, it’s going to have to be an area really improved upon for the band to be given a chance on bigger stages.

As such "Leaving Planet Hell" could win fence-sitters musically, but also could lose many more due to the sub-par vocals.

HELL:ON – Once Upon a Chaos