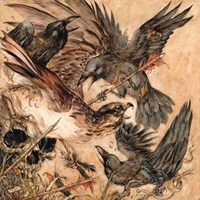 The third album "Shadows" from Virginia’s Valkyrie comes seven years after their last release- but it’s understandable the gap between records, especially due to guitarist/vocalist Pete Adams other duties for the higher profile act Baroness. The quartet straddle the lines of traditional heavy metal and southern doom, never getting too stoner-oriented for their own good. A lot of the lead work has that spider web, 70’s quality that put Wishbone Ash and Thin Lizzy on the map – check out Pete and fellow guitarist Jake Adams electric push and pull interplay and team ups for "Golden Age" and "Shadow of Reality" that showcase their drive and melodic moves.

The arrangements seek a 5-6 minute comfort level, engaging in this type of low-tuned swing/ groove where the instrumental passages build and build in this magical universe – aiming to transport the listener into the roots of traditional metal and heavy rock. No extraneous introductions needed, the Clutch meets Sabbath oriented "Mountain Stomp" lives up to its namesake, the vocals capturing the aural landscape in an older nuance, natural in register and very bluesy/soulful. Drummer Warren Hawkins and bassist Alan Fary keep up with the spider web gallops from the twin axe duo masterfully, whether it’s in a laid back, soothing manner for portions of "Temple" or a little bit more of an energetic, bombastic fashion for "Echoes (Of the Way We Lived)".

Where a lot of bands would prefer to live in the fast lane tempo-wise, Valkyrie rely on a lot of mid-tempo twists and turns to make your head bob and toes tap – and that’s perfectly acceptable to these ears. Also keeping the proceedings under 45 minutes ensures more front to back listens on those car rides and favorite party destinations. "Shadows" is another solid representation of a quartet that want to establish their take on traditional metal with doom inflections can be taken from the 70’s into the current generation just fine.