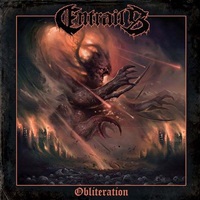 There’s something to be said about consistency – no matter what style of music. Originality can be a struggle, especially in a genre like metal that is 45 years old – but you have to respect and admire execution of ideas throughout one’s career. Entrails from Sweden certainly perform in the classic ‘Swedish death’ style once again on their fourth album "Obliteration". Even though they’ve lost long-time member Mathias Nilsson on guitar, their new guitarist Pontus Samuelsson stepped in without the quartet missing a beat.

Anyone who loves that rough bass, deep growls, and steady guitar harmonies from an Entombed, Grave, or Dismember-oriented perspective will find plenty to sink their head around for "Epitome of Death", "Skulls", and one of my favorite song titles of the year: "Bonestorm". Bassist Jocke Svensson doubles on vocals, equally adept at unleashing the blood curdling Slayer-ish screams for the opening notes of "No Cross Left Unturned" as he is being dark in a semi-growl manner throughout the verses and choruses of the same ideal up-tempo first cut.

Plenty of people want the fastest, most technically insane riffing and lead breaks, packed with incessant blast beats and subterranean growls from the depths of hell. "Obliteration" goes as far away from that direction as possible – you’ll have occasional nods instead to Viking metal in the guitar intro to "Epitome of Death" or even classic Bay Area thrash for the pumping bass and slower, steady double bass tempo throughout "Obliterate". The darkened, skull adorned landscape as a wild creature stalks overhead makes for worthy metal talk as Entrails’ latest cover art, and fortunate for the listeners the musical quality is equally enticing.

Entrails believes 1990 and 2015 do not have 25 years of separation in their death metal philosophy. Old school is where they remain – and there’s nothing wrong with that.

ISENMOR – Land of the Setting Sun