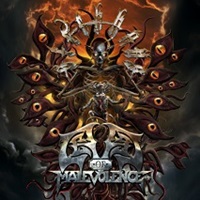 Blackened thrash/death on the latest album from Sterbhaus, the follow up to 2012’s very good "Angels For Breakfast…and God For Lunch" outing. Musically straddling the ravenous Swedish death meets Bay Area thrash lines, the caustic vocals from bassist Marcus Hammarström make "Necrostabbing the Corpsefinder" and "Baby Jee and the 3 Stalkers" numbers that will go over better for the ardent underground follower as the quartet have little need to be commercially viable.

Lead guitarist Simon Olovsson doesn’t always feel the need to blitz the airwaves in his breaks – often choosing to be very melodic and tasteful to add that hook nuance to the band’s arsenal. Humor is still present in the lyrical topics and titles – "El Giftus Satanus" and "Bloodbarf" obvious in their twistedness. Not everything is up-tempo as "The King of the Red" sits very well as a dynamic difference-maker, a solid mid-tempo number that many would consider similar to Metallica in their late 80’s/ early 90’s incarnation (outside of Marcus’ death screams). They know that metal fans love their metal heavy, fast, and aggressive – and "New Level of Malevolence" delivers front to back on all three fronts.

Purity matters most these days – along with intention and execution. Too many times acts that cross-pollinate their sound struggle to establish their own identity because they aren’t able to hone things down to a true essence in terms of style. Sterbhaus does not struggle in that department – and for those who want some killer songs, transitions, and fun – this album crushes.