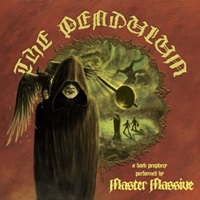 22 years in the making, Sweden’s Master Massive release a progressive hard rock/heavy metal opera in "The Pendulum". Containing guest artists from Therion, Lion’s Share, Niva, and Masquerade among others in terms of the six vocalists outside of the main members, guitarist Jan Strandh initiated the idea of this 13 song (plus 4 intros/interludes), 72 minute record – "The Pendulum" is in human hands, a single individual given the power to change the fate of Earth.

I would say overall songs like the Middle-Eastern oriented "The Monastery", "Time Out of Mind", and the epic 7 minute doomy ballad "Hymn to Yellowhawk" possess a lot of this old school charm, both vocally and musically. Artists that can come to mind include Black Sabbath, Rush, the lighter side of Opeth, and even a touch of Dream Theater – nothing is overly complex, but the musicianship and flow of the material is solid. "Four Dreams" has a great bounce in tempo that veers into folk meets Jethro Tull territory, although the time changes give it certain heaviness that should make Master Massive followers smile ear to ear.

The differing vocal approaches make the story-line more intriguing, and I think the performances are high caliber. Are there times where I believe a longer album could be that much stronger in a tighter time-frame (say 55-60 minutes)? Certainly. Favorites change day to day- currently the Petter Karlsson drum propelled "Showdown" that is wrapped around some killer vocal harmonies and early Iron Maiden aspects or the mini-classic guitar salvos lobbed about during the crushing "Eye of Silence" that could bring Metallica to mind (bass solo included) would be two of the best Master Massive tracks.

Another collective concept piece, "The Pendulum" ability to create shifts in mood through its exemplary songwriting keeps Master Massive at the top of mind.