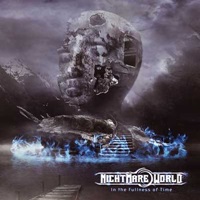 NIGHTMARE WORLD – In the Fullness of Time

Threshold rhythm guitarist Pete Morten happens to be the vocalist of this power/progressive metal sextet Nightmare World, finally pulling together their first full-length album "In the Fullness of Time" after beginning as a group in 2006. Considering Pete’s duties since joining Threshold in 2012 it’s understandable that this band would be not the full-time priority – but it’s interesting that his vocals have a lot of qualities for his main gig amidst the 9 tracks.

Overall songs like "The New Crusade" and "Burden of Proof" are more in that happier, German power mode – straddling the lines of Iron Savior, Gamma Ray, and older Edguy. At other times the guitar work and drumming is very straight forward and anthem oriented – studying up on Priest and Accept for instance on "No Regrets" outside of the progressive side shuffling during the opening instrumental passage. A ballad such as "The Ever Becoming" showcases the clean restraint of guitarists Sam Shuttlewood and Joey Cleary, drawing back into some early 80’s influences like Savatage or Riot as the multi-part vocal harmonies are pure gold during the bridge and chorus.

There is a space-oriented vibe you get from the overall production of "In the Fullness of Time" – as if the band took the best elements of Threshold and Iron Savior tone wise and mixed/mastered their style in that direction. Is Nightmare World the most original power/progressive metal band on the market today? Not by a long shot- what they lack in originality though they more than make up for in terms of solid hooks, dynamic songwriting, and a front to back record that probably will gain a lot of spins in my laptop when time allows.

VILE CALIBER – Tomorrow’s For Those Who Dare