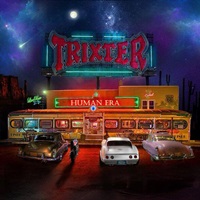 Having lived through the melodic hard rock heydays in the 1980’s and its subsequent freefall during the 1990’s while alternative, grunge, and nu-metal took over the mainstream, many bands had to find greener pastures or wait until the scene morphed again. Thanks to the internet connectivity leveling the playing field and putting music choices back in the hands of the consumers, I’d say that there are just as many releases coming out from long-timers as there are newcomers in this sub-genre. New Jersey’s Trixter gained decent attention in the early 90’s through their self-titled album and their video/ hit single "Give It To Me Good" – and here we are in 2015 discussing their latest studio record "Human Era".

The quartet continue to pump out their brand of pop metal from a heart-felt position – engaging the ears through a lot of catchy vocal harmonies, especially in the choruses of "Not Like all the Rest" and "Good Times Now", the latter a slower, slinky number that seems to be aimed at the working class. On the other hand you get a little more of a heavier, double bass vibe as guitarist Steve Brown lays down a lot of quick hitting bluesy runs on the energetic "For You", the song having a stylistic cross between Dokken and Judas Priest. Pete Loran has that perfect emotional twist that helps the listener connect to the lyrics through his strong delivery, as I can hear elements of Jon Bon Jovi throughout "Every Second Counts" and the mid-tempo, highway cruising anthem "All Night Long".

Those that remember the late 80’s melodic hard rock albums that would sell in the millions and put 20,000 people in the arenas night after night will treasure "Human Era" – and hopefully Trixter can also pull in some new faces that desire to have some kick ass, happier material that makes you forget about your troubles and celebrate life in the here and now. Those who love Van Halen, Bon Jovi, Dokken and the like… here’s one of the best melodic hard rock albums of 2015.