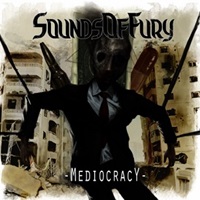 Switzerland is probably not well known on the technical death metal side when it comes to their metal scene- but Sounds of Fury aim to put themselves on the map in this genre. Starting in the summer of 2011, "Mediocracy" is their second full-length album, a 9 song/ 39 minute outing that places equal value on the death metal side as it does the stellar technical abilities on display. Properly seeking out the skills of producer Andy Classen at Stage One Studio, the quartet receive a very clear sonic platform that emphasizes a crunchy guitar tone and deep (but discernable) growls from guitarist Nico.

The band can certainly go off to the blasting races in tempos and viciously intertwine high guitar melody harmonies with stunning riff action as "The Art of Avoidance" and "Neighbour Agression" illustrate, and then at the same time you hear intricate jazzy/neo-classically oriented lead work that maintains cohesion and fluidity while making sense. I feel like a touch of domestic Coroner influence hits in some of the oddly shaped chord progressions that appear in a cut like "Sidewalk Business", but then the band will quickly get down to a solid mid-tempo groove that should pummel audiences as they throw themselves about in fits of adrenaline rage or glee.

Sounds of Fury overall have more of an older outlook I think to the genre – they pick their spots for speediness and do not stay stagnant in one particular tempo or riffing template for prolonged periods. Acts like Death circa "Leprosy", Malevolent Creation, and possibly a touch of Vader come up the most when digging deeper into this material- and the lead breaks plus main hooks are engaging enough to keep even the most casual technical death heads interested for repeated exposure’s sake.

A nice release for those who love a little more musicianship in their death metal, "Mediocracy" could be near the top of your wish-list if you miss the late 80’s/ early 90’s bands.