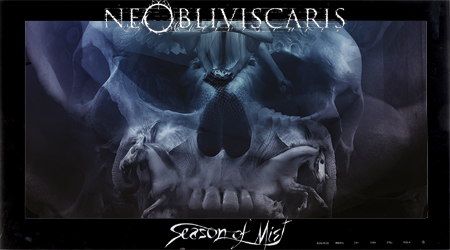 "Ne Obliviscaris", which means "forget not" is the proud motto of Clan Campbell. These highlanders were as successful as ruthless and one inspiration for George R. R. Martin’s "Game of Thrones". Yet the Australian band NE OBLIVISCARIS is neither dealing with folk metal nor bloody minded. It may be said that their compositions at least as complex as Scotland’s history and these musicians share the adventurous spirit of Argyll’s clansmen. Instead the multi- layered songs of their sophomore album "Citadel" are infusing the metal base with avant-garde approaches to jazz, flamenco, progressive rock and many more elements. NE OBLIVISCARIS display extraordinary musicianship and a depth of profound compositional abilities hardly expected from such a young group. Listening to these tracks makes it less surprising that one of Australia’s most prestigious classical conservatories, the Sydney Conservatorium of Music has added the song "And Plague Flowers The Kaleidoscope" taken from NE OBLIVISCARIS’ acclaimed debut full-length ‘Portal of I’ (2012) to their teaching curriculum. The band was founded in the beautiful Australian coastal City of Melbourne, Victoria in the year 2003. Already with their first demo "The Aurora Veil" (2007), NE OBLIVISCARIS garnered massive word-of-mouth prominence within the metal underground. Mainstream press caught up with "Portal of I", which showcased their unique array of influences and dynamic songwriting with a virtuous violin significantly adding to the sound. The Australians also gained a reputation as an excellent live act, while supporting DEVIN TOWNSEND, ENSLAVED, BETWEEN THE BURIED & ME, CRADLE OF FILTH among others. After a highly successful three week headline tour throughout Asia including a sold out show in Tokyo, Japan NE OBLIVISCARIS started a crowd funding campaign to support further international touring. Their target of 37.500 US Dollars was reached in only 38 hours and the final sum of 56.644 US Dollars broke the previous Australian record. With "Citadel" the band is ready to conquer the world. Mixed and mastered Jens Bogren (OPETH, KATATONIA), this album spells international success for NE OBLIVISCARIS in capitals. Listen well and be amazed by this brilliant "Citadel"!