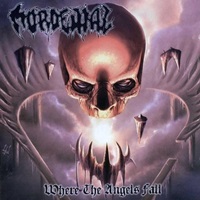 MORDENIAL – Where the Angels Fall

Although starting in 2008, progress has been slow in the development of Swedish melodic death/thrash outfit Mordenial. As a trio, the members currently play in other acts, plus drummer Matthias Fiebig took over on vocals when they lost their singer in 2012. Finally this year, the 11 song debut album "Where the Angels Fall" has hit the scene, and should be ideal for those who like the rawer side of melodic death/ thrash from its early 1990’s development.

The guitar play from Kjetil Lynghaug has a lot of fiery spirit and finesse, the lead work in "Time to Justify" and "Corrode to Rust" is very tasteful and not always at a frantic pace. The tempos tend to be very controlled as well, while Matthias’ acidic roar is in line with Alexi Laiho of Children of Bodom – providing an interesting musical to vocal contrast on "Death Will Follow". Headbangers will delight in the lightning quick riff and tempo changes on the 6:42 closer "Warfare and Destruction", a lot of the harmonics employed during the instrumental sections bringing to mind classic Metallica meets Dark Tranquillity.

I’d place "Where the Angels Fall" in the non-commercial seeking sector of this genre – the trio giving these songs a primal texture and outlook that should gain them plenty of underground street credibility. An adequate starting point for certain, let’s hope that the follow up doesn’t take another 5-7 years to lose momentum.

REACH – Reach Out to Rock