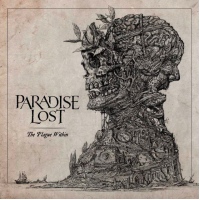 PARADISE LOST – A Plague Within

The arrival of new PL album has caught me completely by surprise. Century Media dumped it in my account and I was at once startled by the way the cover of "The Plague Within" reminded me of PL’s first album "Lost Paradise". There was once a time (1999-2004) when this band had all but abandoned metal altogether, inspired by the likes of Depeche Mode and Sisters of Mercy, the stylistic change also reflected by the way they dressed and their haircuts. Watching videos for "Mouth" or "Fader" one would never conceive of the thought that these guys have once played notes that cause catholic bishops to painstakingly create elaborate black lists of "satanic bands" only to have them become guidelines for their parishioners into good music they would have never otherwise known. Thankfully, the last 3 albums saw Paradise Lost come back and take up the arms seemingly as effortlessly as though they’ve never left, long hair and beards back in style. They have almost come full circle and of the predecessor, 2012 "Tragic Idol" I once said that it almost touched the debut (1990 Lost Paradise) but it was too soon for it then.

Now is that time. This album no longer has anything remotely resembling the "attempted death metal" of the past as some referred to "In Requiem" – this simply IS a genuine death/doom record with elements of the middle career PL. Nick Holmes is one of the greatest, most versatile and most underrated vocalists in metal with a rare quality of his every style: whether growling (yes, Nick growls like you haven’t heard him since "Gothic") "Icon"-shouting or fully singing, every syllable is clear as a bell. Nick’s growling has some similarity to Aaron Thorpe’s (My Dying Bride) especially on "Victims of the Past", (check out "born to save" pronunciation) but for the most part this is Nick Holmes impersonating Nick Holmes. Greg MacIntosh’s guitar is instantly recognizable, now "whiney" and depressing yet beautiful, now aggressive almost with a Machine Head heaviness, then morphing into pure vile and filthy death metal of the (yes!) debut, and then undoubtedly stepping into…black metal! It’s as if Watain off "The Wild Hunt", with the crusty yet clear quality still somehow retained the PL signature sound. Indeed, "Flesh and Bone" is one of my favorites on this new record.

At its core, I would describe "Plague Within" as "Icon" (1993) quality (opening "No Hope in Sight", "Terminal" recalls "Embers Fire", "Remembrance", respectively similar with the latter akin to "Say Just Words" off "One Second" (1997) for simplicity) encased in "Lost Paradise"/"Gothic" background. Nor does PL does shy away from experimentation. One of the most ambitious tracks they have ever recorded musically and vocally is "An Eternity of Lies", where the violin based heavy riff ushers torrents of "paradisical" melody and phenomenal almost operatic vocals. The scope of the song is not unlike "Honesty in Death" from the last album. But it is the catatonic dementia of "Beneath the Broken Earth", the first single, that just floors me with bleak flashbacks of "Joys of Emptiness" off "Icon" or "Forever Failure" off "Draconian Times" (1995). If ever there was a music that made you ponder the futility of life on Earth and the point of a daily struggle, PL are the masters of conjuring it ex nihilo. The proverbial "I was sad before sad was sad" would be an understatement, but a good start.

As far as variety is concerned, "Plague…" is very close to "Draconian Times", almost boastful in how much different layers it can cover in 50 minutes. My favorite albums are the ones that sound like a various artists compilation for the way the songs differ one from another. Yet, with the exception of "Flesh…", every track is pure PL. Greg McIntosh once again proves that he can deliver pretty much out of every major style of metal and sound as though he were an expert at each (perhaps he is?) Space constraints would not allow for a detailed account of each song but noteworthy are: "Sacrifice the Flame" (with a fantastic creepy slow-down that’ll make you swear you’re listening to "Lost Paradise"), Victims of the Past" with a fantastic riff and guitarwork ("Last Regret" off "In Requiem" (2007) comes to mind), Black Sabbathian/COC/Megadeth "Cry Out", and the closing "Gothic" (1991)-like powerful "Return to the Sun" with an abrasive verse riff reminiscent of a faster "True Belief" (Icon) along with a symphonic black metal sounding "walking" main riff with a climate found on "Deus Misereatur", "Icon"’s closer. Indeed, "The Plague Within" begins and ends like "Icon", probably on purpose. Nothing is forced, unnecessary or artificially extended. Every song has different levels yet stands out from the pack.

I am glad I listen to an album non-stop for a week before forming an opinion, now, because, paradoxically, the new PL is both deceivingly simple and revealingly complex. Surely my 2011 prediction that Greg’s extra-PL ambitions (Vallenfyre) will eventually spill into his main band, has come true and thank Nick & Co. for it. I rejoice at the fact that, although they likely never made the millions of Megadeth or Metallica, they kept at the craft and continued to create music to satisfy their own ambitions first and those of their fans second. Much as in the case with Megadeth (have ya heard the new stuff?!) and to a lesser degree Metallica, once they have tried their fans and seen that most kept their faith in them, PL began to pay them back by gradually bringing in the good old sound of the past, yet not completely the past but the past improved. As with previous outings, only God can predict which way they will go next, having arrived firmly at the very beginning. Let us hope that they will continue to deliver quality material like this for many more years.

REACH – Reach Out to Rock