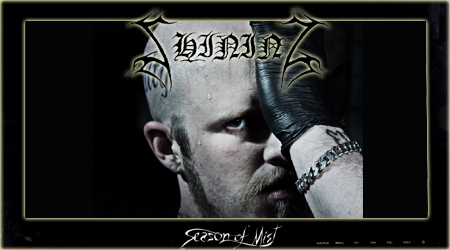 "IX – Everyone, Everything, Everywhere, Ends"

SHINING is more than just a band. In fact each release, every concert and interview becomes a bloody battleground, on which Niklas Kvarforth struggles with his inner demons. The frontman and only remaining original member has never been shy to let the world know about his mental afflictions, which seem to complement or even spark his outstanding talent as a composer and
musician. His ninth album, ‘IX – Everyone, Everything, Everywhere, Ends’ is another excellent example of Niklas’ genius. Reaching back to their black metal roots, SHINING simultaneously melt eclectic influences from progressive rock, jazz, even pop and more into deeply emotional laments from the dark side of the soul. Niklas’ vocals come in an even greater variety of expressions which few would suspect in a singer coming from the extreme metal scene. Moments of pain and confusion turn into insane outbursts of anger. Despair shifts into melancholy and an eerie sense of timeless beauty permeates all. Lacking any tolerance for false tuning, technical flaws and lack of ambition, Niklas has literally beaten any weakness out of his band, which demonstrates its remarkable prowess far beyond any average on this record. Founded in 1996 by Kvarforth, SHINING self-released ‘Submit to Self-Destruction’ in 1998 and spawned the term "suicidal black metal" with this debut 7". A couple years after first full-length ‘I – Within Deep Dark Chambers’ (2000) and sophomore album ‘II – Livets Ändhållplats’ (2001) had cut deep marks into the underground scene, Niklas replaced his whole crew and started a continuous cycle of changing his line-up. With MAYHEM drummer Hellhammer on board, ‘III – Angst’ (2003) and ‘IV – The Eerie Cold’ (2005) began to gather major metal press attention. SHINING then focused on bringing their vision and often controversially received live performances to Europe. Yet Kvarforth’s mental health led to cancelled tours, physical and psychological fights within the band, and finally a break-up. Not content to let things rest after the breakdown, the restless singer returned with new members and the massively successful album ‘V – Halmstad’ (2007). SHINING had reached headliner status and toured with big acts such as SATYRICON and MAYHEM. Several line-up changes later, the Swede once again entered studio and recorded two albums in one session. ‘VI – Klagopsalmer’ was released in 2009 and two years later ‘VII – Född Förlorare’ darkened the light of day. The band also received their first gold disc for the single ‘Förtvivlan, Min Arvedel’ in Sweden. After rotating more musicians in and out, SHINING returned with ‘Redefining Darkness’ (2012) and a less aggressive, yet more sinister sound. Before signing to Season of Mist, the band released the project ‘8 ½ – Feberdrömmar I Vaket Tillstånd’, which featured six of Kvarforth’s favourite vocalists. In August 2014, SHINING entered Andy LaRocque’s Sonic Train Studios to record their ninth album. ‘IX – Everyone, Everything, Everywhere, Ends’ is the sum of Niklas Kvarforth’s musical evolution and experience so far. And while nobody expects the Swede to deliver a record to booze and sing along to, the charged word "art" enters the mind unbidden. This masterpiece should interest lovers of music far beyond the narrow confines of extreme metal. Plug your headphones in and find out for yourself!

BARONESS og THE SWORD til PSTEREO 2015