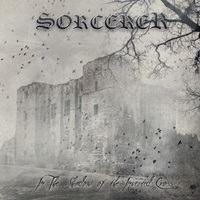 SORCERER – In the Shadow of the Inverted Cross

Originally together from 1989-1992 and releasing two demos in the process, Sweden’s Sorcerer could not buy a record deal at a time when death metal ruled the underground. Bassist Johnny Hagel left to join Tiamat, and the band would dissolve. Reunion shows started over 5 years ago, leading to a revitalization for the quintet and finally securing a record deal for their debut album "In the Shadow of the Inverted Cross". Vocalist Anders Engberg (220 Volt, Section A) is also back, while guitarist Kristian Niemann, guitarist Peter Hallgren, and drummer Robert Iversen are the second generation recruits to round out Sorcerer’s lineup.

These Swedes perform a classic doom template that features longer arrangements (typically between 6 to 8 minutes) and a sense of nostalgia that intertwines Candlemass, Solitude Aeturnus, and of course the almighty Black Sabbath. Choosing to start anew and not delve into their early demo material is very wise to my ears, because the decades of seasoning these musicians have had channels all the right moodiness and emotional feel necessary to keep the energy and spirit of the genre alive and kicking. "Sumerian Script" has that bone chilling mid-section where Anders takes control with pitch perfect melodies and high warrior action that would make Ronnie James Dio proud. The band even punches up the tempo a touch and adds a touch of extremity in the vocal department to make "Exorcise the Demon" an adrenaline boost, which can be necessary in epic doom metal to keep the listener’s ears on edge.

A lot of the solo segments are pure class – taking a similar path as the arrangement at hand, but not self-serving or attempting to pack a flurry of notes in a nanosecond. The 8:29 "Lake of the Lost Souls" and title track are two mesmerizing songs made that much better by the Niemann/Hallgren soloing. Sorcerer just put all of the elements together that make epic doom metal special- and seem to inject a lot of traditional metal dynamics at times which can bring back everything from early Rainbow to early Ozzy.

"In the Shadow of the Inverted Cross" is a must by for not only the doom crowd, but also the old-timers.