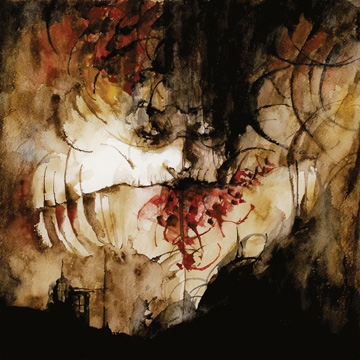 SHINING – IX – Everyone, Everything, Everywhere, Ends

The Swedish king of hateful music is back, and this is just amazing!

The opening track of the album is called "Den Påtvingade Tvåsamheten" and starts with some ambient noises before it kicks off with some rather dark musical compositions. It is quite grand and melodic, as well as dark and melancolic. A nearly perfect mix between beauty and ugliness.

And with no warning what so ever, "Vilja & Dröm" blasts off. A bit more in the direction we know Shining from. This ugly creature that dwells in the darkness of our own minds are quite nicely pictured from the whole musical experience. This song shows that the album has a refined form of potraying hate. The rest of the album also falls nicely into this weird, obscure direction.

"Framtidsutsikter" is a rather special title, since it translates to "future outlooks". The special part of it is when you think of Shining and Niklas Kvarforth in particular as this deity that hates both himself and all mankind. Aside from the title, this is probably also one of the musically most beautiful pieces on the album. A bit calm throughout most of the song. Really grasps the whole DSBM genre.

The next song, "Människotankens Vägglösa Rum" is a bit more aggressive than the last in it’s nature. More blastbeats and harsh vocals along with a bit more monotone, yet angry guitar sound. The melodic riffs remind alot of the 2000’s black metal bands yet the whole energy seems more like an old school thing. A very interesting piece of Shining is contained within this song, and it seems musically like a good song to help understand the chaos that Shining represents. It also has an ok guitar solo about halfway through.

When the song "Inga Broar Kvar at Brenna" starts, you will maybe notice that the album seems quite "half n half" with calm and angry songs. An interesting choice on the band’s side. And since there is a different musical theme every other song, it keeps the listener in suspence. Not much to say about the track except that it is probably the weakest song on the album with the least energy.

"Besök Från I(ho)nom". Interesting title and somewhat special song. It captures the albums chaotic element best of all the songs on the album, so it is in that way a good counterpart to "Framtidsutsikter". This song is a little more dynamic and has alot of special combinations of stuff like slow guitars and fast drums. The lyrics are quite powerful and they seem very personal. One of the best songs off the record.

The bonus tracks for this album are "Black Industrial Eleven" and "Ohne Dich". Definetly worth checking out, but not crucial to the album.

Over all a solid album with very few let downs! Absolutely something that people should check out!

UNLEASHED – Dawn of the Nine