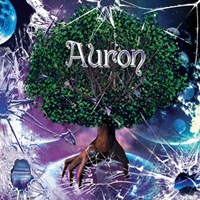 Active since 2007, Russian band Auron spent many years perfecting their skills on the musical front for this self-titled, debut record. You’ll get 12 tracks – the final 2 sung in Russian, and of the other 10, 1 is a classical instrumental piece "Prelude in H-moll" while the other 9 are in English. Auron are more on the heavy metal side of things than necessarily progressive as the background information tends to describe- think of the Scorpions and possibly the commercial side of Yngwie J. Malmsteen when Joe Lynn Turner was fronting the group, along with subtle textures of Dream Theater.

"Obsessions" opens in a neo-classical keyboard flourish before the twin guitars lay down a catchy melodic heavy metal template, the instrumental section showcasing more of their clean picking and Maxim Syvorotkin’s technical bass prowess. Most of the progressive moments happen during the transitions, as the verses tend to be very smooth – check out "Word and Deed" or the heavier 6 minute plus title cut for the band’s interplay and thematic movements. Guitarist Nicholas Bogov handles the vocals, and while he has a higher than normal register the melodies aren’t so far reaching for him to appeal to a wide cross section of metal fans.

The production values are clear, yet feel a little sterile especially in the drum department. Overall, I’d say Auron have a lot of potential, understand the genre at hand, and can construct some catchy melodies and hooks. This could be one to watch over the next few years as they gain more comfort in the English language- and maybe improve upon the folded arm/ promo shot approach (check out their Facebook page).