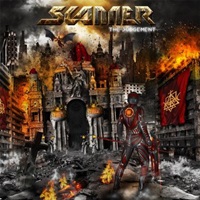 You may need a scorecard to keep up with all the twists and turns in this German speed/power metal act’s career. Loads of member changes (Efthimios Ioannidis is their fifth vocalist – the ultimate number of members since their 1986 start is over twenty), two permanent breakups and reformations, not to mention the 13 year differential between their last album "Scantropolis" and this latest offering "The Judgement". The steadying force driving Scanner is guitarist Axel ‘A.J.’ Julius – the sole original member left standing. Recording this 11 track, almost 55 minute effort in their own studio, expect a record that navigates their speedy past while also throwing a few standard traditional elements to keep this on the adequate heavy metal course.

Those who love the breakneck licks and double bass thunder should salivate over "F.T.B." and "The Race", while something more throwback in an 80’s classic sense turns up for the anthem-oriented "Eutopia" (their spelling, not mine), Efthimios melting paint off the walls because of certain falsetto screams while a background choir chimes in on certain supporting lyrics. Certain clichés do manifest themselves – especially in the longer 7:17 "Battle of Poseidon" in the sense of the spider web twin guitar lines -think Maiden meets "Thundersteel" period Riot- between A.J. and Andreas Zeidler and certain vocal melodies that resonate in the heroic/ fantasy power camp. And of course what power record wouldn’t be complete with an obvious mead hall oriented call and response song like "Pirates" – the riffs swirling about like the ship rocking to and fro as the chorus encourages fist waving chants.

Scanner were never quite able to rise to that elite level that Helloween would achieve in the German metal community – and I think "The Judgement" while being true to its ideals doesn’t contain a lot of interesting hooks or overall themes that will gain newcomers to the fold. Beyond the computer animation scatter shot cover art, this record is meat and potatoes power metal that keeps the keyboards to a minimum and focuses on a crunch aspect that elevates to a spacey, semi-galloping vibe (even hitting King Diamond territory on "Known Better"). It’s decent for a few spins though.

CARACH ANGREN – This Is No Fairytale