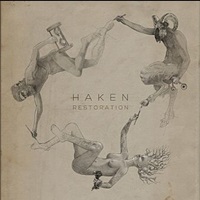 Normal bands would consider a 3 song effort an EP, and although UK progressive metal act Haken look at their latest release "Restoration" in the same regard, understand that you’ll get close to 34 minutes of songwriting for your time. Through three previous studio albums the sextet have asserted themselves with a melodic yet intricate style, incorporating a number of 70’s and 80’s influences along with a modern sense of timing – which continues to fascinate as you never know what direction the band will take from track to track.

Bassist Conner Green makes his recording debut for Haken, adequately adapting to the twisted tempo changes right off the bat for the opener "Darkest Light", many of the passages providing dual ambiance to circus-themed elaborate contrast. The 7:51 "Earthlings" is a lighter, airy offering which allows guitarists Charles Griffiths and Richard Henshall a chance to set up a clean kaleidoscope of textures and enhance vocalist Ross Jennings morose lower to mid-range performance (also doubling up in key chorus harmonies to add extra tension to the track). The closing number "Crystalized" is a sprawling 19:22 epic, featuring robotic-oriented vocals at times, playful rhythmic movements, and a repetitive keyboard part that cements much of the arrangement – while the instrumental sections give keyboardist Diego Tejeida, both guitarists, and anyone else who wishes free reign to let their creative needs and technical endeavors fly. Half way through they use a panned multi-layered vocal montage that reminds me of classic Queen meets Yes, the acoustic guitars and keyboards taking on a similar tact for dynamic divergence.

It’s difficult to say which particular band Haken sound like – they take in elements of 70’s progressive rock, all eras of progressive metal, and write material that can move you, make you think, and engage parts of the brain that you thought remain dormant. They aren’t afraid from time to time to throw in a little of the low tuned bass thump that Korn made infamous- but also add in the adequate crunch and charm to be musical about things.

Another brilliant release – can’t wait to see what their fourth studio album has for Haken, as they are a treasure to behold.