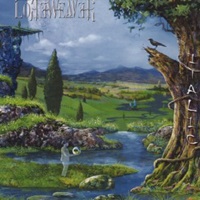 An Italian progressive metal band with odd symphonic, power, and modern tendencies, LoreWeaver release a debut album in "Italic" that may take numerous spins to full engage the brain and stick. Especially with 7 songs spanning the course of 62 minutes, there’s a lot of information to consume – including two sprawling epics in the almost 12 minute "My Freedom" and close to 16 minute "The River Suite".

Occasionally the keyboard passages possess more of that pomp and circumstance associated with Styx and acts of the 70’s – which intertwines with fluid, wah wah guitar soloing and then a drum pattern that is slightly electronic/ dance oriented in comparison to what you would expect from a progressive metal song. And this occurs at the first 2 minutes and change of the epic "My Freedom" – where vocalist Barbara Rubin soars and descends like the best metal singers in the business should. Contrasting the showmanship can be a rougher, aggressive, and darker veneer – "Angry Tears" living up to its title due to the staccato-oriented guitar work and cultural instrumental section.

Dream Theater and Rush will come up often in terms of their odd time signatures, musical interplay, and definite technical dexterity- but you also feel that LoreWeaver have a lot of love for Tool, Faith No More, and current symphonic/ gothic acts that come from their Italian homeland. The problem is, even when you write longer pieces, you need to maintain some sort of logical construction and flow – and I feel like LoreWeaveR instead have a series of riffs and ideas that they jam off of and try to make semblance of, but often can lose the listener. "The River Suite" is an example of this, as the lighter jazzy moments seem like an afterthought, and then the slower, groove passage against atmospheric keyboards worked a little better – only to lose me again as the band get a little too theatrical in terms of the melodies.

Maybe the second record will smooth out these bumps in the musical roadmap of LoreWeaveR- until then "Italic" is a progressive metal stew that appears a little lukewarm for my tastes.

RESISTANCE – The Seeds Within