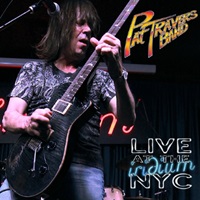 Digging back into their 2012 shows in New York City prior to the release of their studio comeback album "Can Do" the following year, the Pat Travers Band is a quintessential axe hero in the hard rock genre. You get a great cross section of his entire discography through this 12 song release – surprisingly absent though is his biggest ‘hit’ , the cover of "Boom Boom (Out Go the Lights)".

No matter really, Pat delivers a steady stream of killer songs and lead breaks that keep the juices flowing, the crowd bouncing, and those axe lovers studying just a bit more. Be it Thin Lizzy dual-harmony oriented like the opener "Rock and Roll Suzie" or blues numbers like the Ray Charles classic "I’ve Got News For You", the band delivers tasteful renditions of these songs and can keep the musical interplay flowing. Guitarist/vocalist Kirk McKim, bassist Rodney O’Quinn, and drummer Sandy Gennaro plus guest blues harpman Jon Paris aren’t relegated to mere background players, as they all propel these songs in a complementary fashion.

"Ask Me Baby" contains a short drum solo in its concluding moments, while the closer is an interactive Ram Jam cover of "Black Betty" which spurs on audience participation, containing a lot of that jam-orientation between band members that shows reverence and respect for all the material- be it covers or Pat Travers originals. If you are a fan of guitar heroes from the 70’s, "Live at the Iridium NYC" is an hour long return to those glory years.