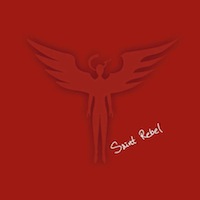 The second album from Copenhagen, Denmark’s Saint Rebel is a self-titled one, a sequel to 2012’s "The Battle of Sinners and Saints" that received award nominations domestically and led to their first tour of North America. My first exposure to the band’s style, Saint Rebel is a quintet that has a lot of that darker hard rock feel that maybe mutates modern production elements with classic hard rock, as if taking in a little of the Seattle scene from the early 1990’s and still maintaining attitude and aggression.

It’s as if the band takes a lot of the spunk of alternative/metal-core and then fuses straight ahead hard rock in the mix, while the vocals of Jonas Kaas float between savage screams during a lot of the choruses and trailing verses and commanding melodic notes otherwise. They can be a little doomy in their riff/ tempo choices for "Could_Our_Kills_Endure" or more pummeling in their attack depending on the feel they wish to go for, as evidenced by highlight "Leave a Scar". The 12 songs on display are tight, but a lot of times I didn’t feel the hooks on a musical or vocal perspective could keep my interest for very long – which can be problematic given that this isn’t the most progressive band to come down the pike. So you can hear Soundgarden and Alice in Chains intertwining with Foo Fighters and a touch of the Killswitch Engage sound throughout- but for some reason it doesn’t click from song to song.

They say you have a lifetime to write the first record and have to hurry up to get the second on the marketplace. Maybe the third record will give Saint Rebel a little more diversity and creative insight into sustaining a prolonged career in the heavy music field.

BATTLEAXE – Power from the Universe (re-issue)