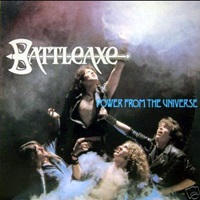 BATTLEAXE – Power from the Universe (re-issue)

The second album from NWOBHM act Battleaxe, "Power from the Universe" originally hit the streets in 1984 on Music for Nations, and 30 years later SPV sees fit to re-issue the record for the newer generation to gain historical perspective on the roots of the scene. The original 8 song album appears along with 4 bonus tracks from a Neat Records recording session held in 1987, so expect a very down to earth traditional sound from this quartet.

Their style has a lot in common with early Def Leppard, Twisted Sister, and AC/DC – a lot of blues-based anthems with call and response gang oriented choruses and riffs that you can throw fists in the air with or shake and groove depending on your preference. Keyboards come in for enhancement sake on the epic 6:49 "Fortune Lady", Brian Smith pumping out a steady bass foundation while the riffing and blazing lead break finale has a pre-cursor marching feel to Iron Maiden’s work on "Stranger in a Stranger Land". Dave King as a singer may not necessarily be the most powerful singer in the universe, but he has that kind of dark charm that gives off a bit of the Graham Bonnet meets Marc Storace of Krokus – effective on mid-tempo rockers like "Shout it Out" or Saxon oriented "Metal Rock".

The bonus tracks possess more of a lower, live or raw production value, but do not discount the attack of "Killer Woman" (some of the riffing very similar to another Saxon classic "The Power and the Glory" at a faster pace) or the Accept-oriented "Love Sick Man". You can tell that Battleaxe took in a lot of the similar blues oriented hard rock influences of their contemporaries and pumped out engaging material that still had some value, even if they didn’t ascend to as high of a rank as a Def Leppard or Saxon.

Probably the best full record in their discography, Battleaxe is back and creating new material to show NWOBHM will never die.