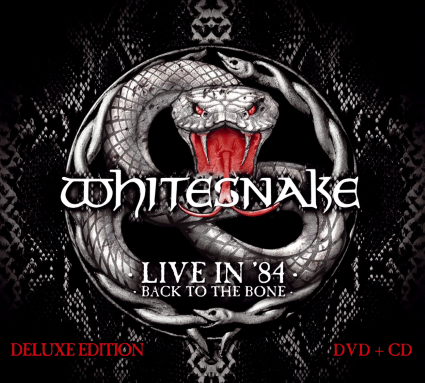 The legendary bluesy hard rockers known as Whitesnake were a brilliant live-band back in 1984 (and still are, damn it!), which this "Live in 1984 – Back to the Bone" CD/DVD package clearly shows and proves. The very line-up itself is more than enough to get my annoyingly little zit of a dick hard: Neil Murray (bass), Cozy Powell (drums), Jon Lord (keyboards), Mel Galley (guitars), and, obviously, David Coverdale (vocals). The songs on this release are all lifted from different recordings made during the "Slide It In" world tour, and I must say that the selection of songs is impeccable. The sound quality is decent, but a bit rough around the edges and bootleg-ish in places. However, you can easily hear what is going on at all times and every instrument is clear and present for the most part. I guess that the honest and raw sound and presentation of this release simply appeals to me. What really bugs me is that the digital promo I received only featured the audio tracks as opposed to both the audio and the video tracks, so, speaking frankly, my enthusiasm and praise of this release basically only applies to the audio tracks, but I cannot imagine that the DVD is any less interesting or captivating, so I dare say that this release is recommended regardless of whether you are a fan of early Whitesnake, a new fan who wants to get acquainted with the "Slide It In"-era, or simply a lover of great and timeless hard rock in general.