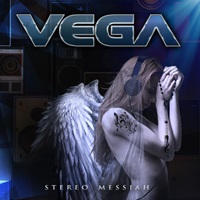 Vega are a quintet of UK melodic rockers who return for their third studio album "Stereo Messiah" – another 12 song collection that focuses on strong musical and vocal hooks, the right emphasis of harmonies during the choruses, and occasional flashes of instrumental talent in the appropriate places. Too often the struggle for these newer acts relies on familiarity to the bigger talent pool that reigned the airwaves during the 1980’s – but not so for this band.

Nick Workman has really improved immensely over the course of Vega’s discography – stretching his upper range without soaring past the bird call notes on early highlight "Wherever We Are" to become one of the premiere melodic rock singers. Keyboardist James Martin adds a thickness in terms of his phrasing and chord emphasis, supporting the guitar work of Marcus Thurston in a variety of ways, be it a more mid-tempo commercial offering for "Ballad of the Broken Hearted" or a driving, more Journey-oriented number that will lift people out of their seats such as the follow up "Gonna Need Some Love Tonight".

Def Leppard’s Joe Elliot contributes a song "10 X Bigger Than Love" that he also duets on, proving that his talent goes beyond his own act – as I love the exotic guitar/keyboard touches that give this grooving number another slot on the ‘must hear’ register. Recording this album over 14 days in two blistering sessions, you get the feeling that Vega are confident in their sound, know how to write compelling, melodic-oriented songs and can translate these tracks easily from the stereo to the stage.

It’s an American style that when done tastefully registers high in the memory banks. "Stereo Messiah" is receiving much acclaim, and deservedly so. Be it through spacious grace on "My Anarchy" or the darker, driving guitar action on the title cut, Vega possess all the dynamic tools of the trade to be a leader rather than a follower in this genre.

WHILE HEAVEN WEPT – Suspended At Aphelion