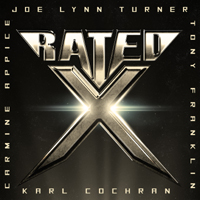 Rated X is an exciting new band consisting of well-known musical figures such as Joe Lynn Turner (Deep Purple, Rainbow), Carmine Appice (Ozzy Osbourne, Blue Murder), Karl Cochran (Ace Frehley), and Tony Franklin (Whitesnake, Blue Murder). The line-up pretty much speaks for itself, and the music spawned by these legends is pretty damn catchy and fun to listen to. One can easily draw parallels to their former bands, which, obviously, is a great thing in my opinion, but what really gives me a hard-on is the way in which Rated X seem to lean towards not only the classic British hard rock sounds and releases of old, but also the American school of classic hard rock. There are instances when the underrated "Slaves and Masters" by Deep Purple come to mind and others when the classic Blue Murder debut album seems to creep into the picture, not to mention "Difficult to Cure" by Rainbow. The drumming of Appice is rock-solid, the vocals of Joe Lynn Turner sound great, Cochran’s riffs are memorable, and Franklin’s punchy and meaty bass lines lay the perfect rhythmic foundation and groove along nicely with the drums. As a whole, "Rated X" is a solid and consistent album throughout, and it is quite atmospheric in places. While I did not find it totally mindblowing as such, I find it a great slab of hard rock music, and it ought to appeal to all you lovers of Blue Murder, Whitesnake, Rainbow (the Joe Lynn Turner era), and Deep Purple (the 80s era) out there. Hopefully these guys will make a few more records like this one.

PAGANIZER – 20 Years in a Terminal Grip