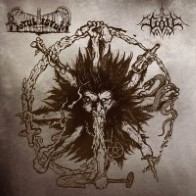 Dying Sun Records were kind enough to mail me a copy of this split CD consisting of 2 songs by Botulistum and 6 songs by Göll, both of which hail from the Netherlands, and this release was something out of the ordinary in more than one way. Both entities vomit forth a strange sewer-brew of sickening and vile black metal mixed with harsh and unpleasant noise and dark ambient-like soundscapes. Yes sir, this is pretty far out stuff. For some reason I expected traditional black metal, but luckily that was not the case. Anyway, I digress (as usual). Let us get back to the music, shall we?

While Botulistum is, musically speaking, pretty damn chaotic, unstructured, and downright insane to listen to, Göll is slightly more structured and "musical" in the sense that you can actually discern real songs and melody lines underneath the fuzzy and harsh walls of sound. I guess one could say that the music of Botulistum appears slightly more spontaneous and intuitive while the 6 compositions by Göll seem a little more planned out and are simply more catchy and memorable in my opinion. I have to admit that I prefer Göll to Botulistum as I think their mixture of inhumanly raw black metal and noise toppled with crazy and demented vocals works better and is more captivating compared to that of Botulistum. Some of the synth-parts are very well-executed and the drums certainly complement the intense and unsettling music, which goes for both bands. There are a lot of layers and nuances to the songs, which entails that one discovers something new every time one listens to the whole thing.

"Botulistum/Göll" does indeed contain some dark, perverted, and filth-ridden music that does not exactly lighten one’s mood or brighten one’s day when listening to it, but it is all the more fascinating because of that. While Botulistum did not exactly blow me away, I found Göll very entertaining to listen to. Do keep in mind that this is not exactly your average black metal release, so have patience when listening to this album as it takes quite a few spins before things start to sink in for real. The CD is limited to 500 copies and came out late last year, so do not wait too long if you want to obtain a slimy copy of this sick and twisted release! Support Dying Sun Records, damn it!

ATAVISMA – Where Wolves Once Dwelled

IN SANITY – Gates of Insanity