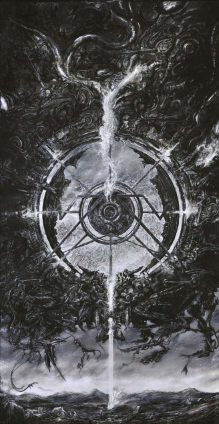 ‘Flesh Assimilation’ is the debut full-length from Irish death/black trio ZOM. To be honest, I have always had a bit of a problem with this band. I have seen them live on numerous occasions and left for the bar before the sets were over, and have checked out but was unimpressed by their 2013 EP ‘Multiversal Holocaust.’ So why bother reviewing ‘Flesh Assimilation’ you might ask? Well, firstly because I am a big fan of this type of music and secondly, because I am aware of how popular the band are becoming (and it isn’t just quantity of supporters I am talking about – it is the fervent quality of that support. A recent negative review on Metal Ireland sparked over one hundred responses from those who felt the band had been wronged). I am Irish and I support the Irish Metal scene. If so many people have fallen under ZOM’s dark spell there must be a reason for it, right? So, I am returning once again to ZOM to try to understand what all the fuss is about. But at least you know where I am coming from…

The short answer is that I still can’t figure out why people seem to like these guys so much. The sound of the band is the first and most powerful obstacle. The instruments are so loose and messy that all impact and menace becomes subsumed to an otherworldly anti-cosmic cloud of debris. That effect might be on purpose, but to me it drains ZOM of all power, so that they become an empty threat. The subterranean bellow of the vocals makes things worse. Rather than an extra weapon in ZOM’s arsenal, they become little more than a texture and not a particularly welcome one at that. The second failing is the song-writing. On the whole ZOM just haven’t moved up to a level where they can come up with consistent, compelling tracks. Some of the slower, more slamming, parts have the potential to be memorable, but ZOM’s insistence on getting back to that baseline morass of crusty blackness as soon possible ruins any such chances.

So there you have it. What should have been a record of face-smashing heaviness becomes a muddled storm of diabolic noise that crackles with unfulfilled potential. If ZOM worked on tightening up their playing and did something about the vocals they might have a chance. If they focussed more on the songs than their sound they might actually become as good as so many believe they actually are. But not for now.