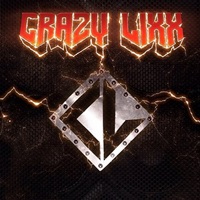 Considering my love of 2010’s "New Religion" but less than enthusiastic outlook on the follow up 2012’s "Riot Avenue", this self-titled fourth studio effort from Sweden’s glam/hard rock/metal oriented Crazy Lixx did have me treading cautiously. After numerous spins, the polish is back in the production and vocal department, and boosts the hook/ retention factor immensely. Vocalist Danny Rexon has that bluesy vibrato strut as well as reaching bird call high notes, intertwining to me the best of Sunset Strip singers and Sebastian Bach right from the start on "Hell Raising Women" and the commercial follow up "Sound of the Loud Minority".

Andy Zata and Edd Liam as a guitar duo aren’t pure shredders, but prefer to keep things on the straight and narrow in line with the arrangement, bluesy and melodic. Their harmonic sense on the Hurricane-like "Girls of the 80’s" goes hand in hand with the heavier antics for the street level anthem "All Looks, No Hooks". Certain songs have that Guns ‘N Roses/ L.A. Guns spunk like "Call to Action" while others are smoother, a little more polished, and in line with say Dokken or Def Leppard such as "Psycho City". The multi-part vocal harmonies during the choruses are in line with that early 80’s ability that helped Kiss and the aforementioned Def Leppard gain major popularity and crossover appeal to a larger, commercial marketplace.

As a band gains more confidence and touring under their belt, it’s less about proving oneself but instead maintaining that focus on delivering solid songs to their built in audience. Highlights change by the say, but the steady Joel Cirera drum stomp on "Wrecking Ball Crew" as well as semi-acoustic/ semi-electric number "Outlaw" are two that my headspace returns to consistently. In the end, this record has the right balance between down to earth good times and solid sound – so if you love melodic hard rock, glam metal, and great songwriting, get thee some Crazy Lixx.